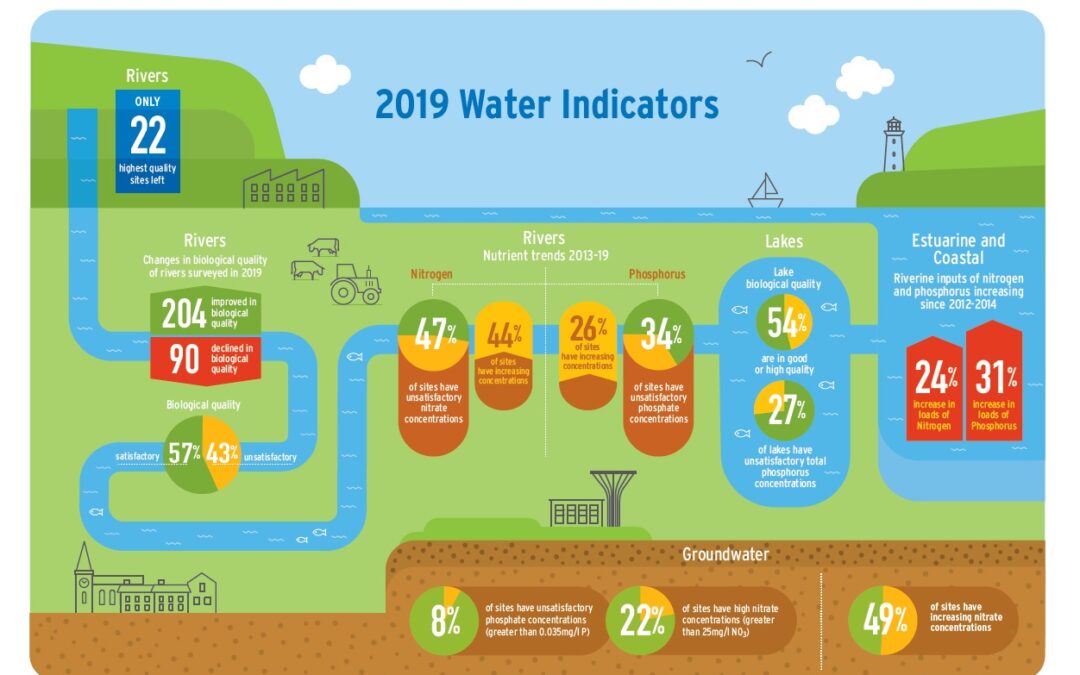 The Environmental Protection Agency (EPA) in Ireland has published the Water Quality Indicators Report 2019 which provides an assessment on Ireland’s surface water and groundwater quality.

The report found that nutrient concentrations are high in a significant number of Irish water bodies with more than one third of rivers and a quarter of lakes failing to meet their environmental quality standards for nutrients. In the north east of the country high levels of phosphorus are impacting on lake quality, while in the south and south east, high nitrogen concentrations are damaging the quality of the estuaries.

One finding of particular concern is that nitrate is increasing in nearly half of Irish river sites and phosphate is increasing in a quarter of rivers. This shows a decline in quality since 2015, when only a small proportion of sites had increasing nitrate and phosphate concentrations (1.4% and 4.2%, respectively). An increase has also been seen in the inputs of total nitrogen and total phosphorus loads to the marine environment, which have increased by 24% and 31%, respectively since 2012-2014.  Ground water has also seen an upward trend in nitrate with almost half of groundwater sites having increased nitrate levels.

High levels of nitrate are contributing to eutrophication (the over-growth of plants and algae that outcompete and displace other flora and fauna, causing oxygen depletion) in Irish freshwaters and estuaries and are causing difficulties with drinking water standards in some areas. This is a particular problem in the south and southeast where trends are going in an upward direction. There will also be longer term impacts for the estuaries and coastal waters. Irish coastal waters are largely in good condition but more of these water bodies will be put at risk if this issue is not tackled.

Analysis completed by the EPA in Ireland shows that intensive agricultural practices are the predominant source of excess nitrogen in Irish waters, particularly in the south and southeast of the country. The EPA have stated that the forthcoming review of the Nitrates Action Plan, the new Common Agricultural Policy Strategic Plan and the full implementation of the EU Farm to Fork Strategy and Biodiversity Strategy offer significant opportunities to achieve improvements in water quality.

The attached infographic provides a summary of the main findings from the report.  With the report’s findings, we can see the importance of nutrient monitoring and the applications for the Life Ecosens Aquamonitrix nitrite /nitrate analyser.